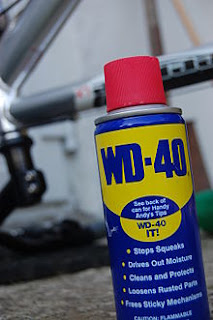 When I first heard that Graham Milner was going to be talking about WD-40 at BIF-7, I was surprised ... and a little wary. If BIF was all about innovation, dramatic change, and personal transformation, wasn't WD-40 the complete polar opposite: a stable and boring solid rock product that hadn't changed since the Eisenhower years?

But once Graham Milner began his story, it was clear that he and WD-40 belonged at BIF. Because WD-40 emerged only after failure. And repeated failure. The proper name of the product -- which I learned at BIF-7 from Graham -- is "Water Displacement – 40th Attempt". Yes, it took the creator (Norm Larsen) forty tries until he perfected the formula that repels water and prevents corrosion. As I sat in my seat at BIF absorbing the information, I challenged myself to think of examples when I persevered through forty failed attempts. I couldn't come up with many.

Graham's story provided an unexpected and down-to-earth reminder that innovation doesn't come easy and many never break-through because they're unwilling to endure the constant failures. Failure would emerge as a key BIF-7 theme as many of the storytellers would note the relationship of failure to both innovation and entrepreneurship.

Graham's other WD-40 story also related to innovation. He told how WD-40 was nearly as famous for the red straw that everyone always lost as it was for the product inside. So, even when you succeed and build up a brand with healthy margins for over 50 years, there's still room to innovate. To their credit, WD-40 (no doubt after some failed attempts) innovated and recast the red straw as the Smart Straw.

I'll bet this won't be the last time they fail and improve because of it.