October 17, 2011
What does Isaac Asimov have to do with BIF? The answer: Valdis Krebs.

You see, Valdis looks at network topology and sees all kinds of innovative possibilities for analysis and extrapolation, not unlike Asimov's Hari Seldon, who famously developed psychohistory, the science of predicting the future in probabilistic terms.

During his BIF-7 talk, Valdis explained the guiding principles involved with social and organizational network analysis:

Valdis demonstrated the depth and utility of this analysis by showing a network genome of BIF-7 attendees who had completed a pre-conference survey. The algorithm depicted a connected system and suggested recommended connections based on interest. Valdis was kind enough to send me the visual, and I've reproduced it below: 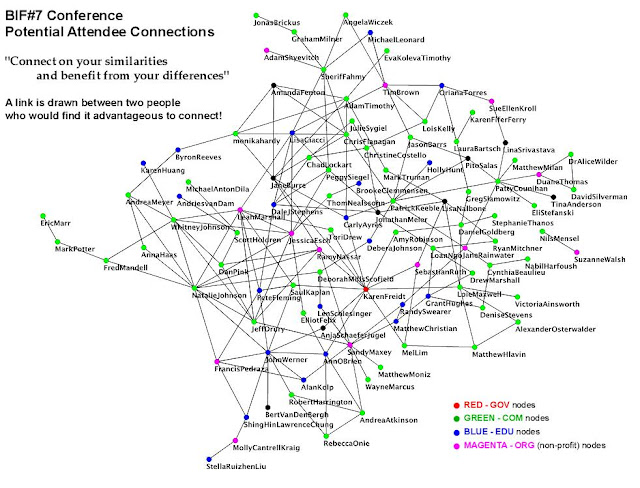 The demonstration was impressive, even though Valdis had extremely limited input data and an incomplete sample set (not everyone who attended BIF-7 completed the survey, including me apparently). With a rich data-set, the implications for this kind of network analysis are staggering and more than a little frightening. Forgot the nascent connection suggestions LinkedIn and Facebook make now, tomorrow's network analysis won't suggest connections, they will predict the people we'll connect with in the future.

"His name was Gaal Dornick, and he was just a country boy who had never seen Trantor before."
-- Isaac Asimov, Foundation