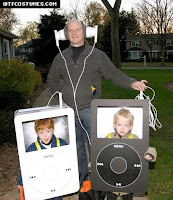 I don't know how much Dan Pink personally likes Halloween, but it sure corroborates the talk he gave at BIF-7. People love to innovate and push the envelope with costumes. Just on our street this Halloween I saw someone dressed up as a cell phone, a meticulously made up geisha, and a Facebook profile page. Some of the creative costumes worked and others failed, but the point is that creative thinking and a willingness to try new things accompany innovative costume-making.

This is strikingly similar to the point Dan made at BIF-7, that unconventional and non-commissioned work can lead to breakthroughs and innovation. As an example, Dan cited Andre Geim and Konstantin Novoselov who won the 2010 Nobel Prize in Physics for groundbreaking experiments with graphene during their free "Friday evening experiment" time. (Note: Dan explores the potency and value of non-commissioned work in more detail in his newest book, Drive.) 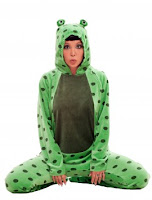 Most unconventional and non-commissioned experiments do not lead to breakthroughs, though, and Dan indicated that the failure rate might be as high as 90%. This recalls Sturgeon's Law, the famous adage from American speculative fiction writer Theodore Sturgeon that states "ninety percent of everything is crap".

Dan deftly closed out BIF-7 by relating how Andre Geim previously won an Ig Noble Prize (years before he won the Nobel Prize) for work on the magnetic levitation of frogs. Dan's conclusion: "If you really want to change the world, you need to levitate some frogs".

My Review of Drive:
http://ravenhost.blogspot.com/2010/12/drive-by-daniel-pink-book-review.html