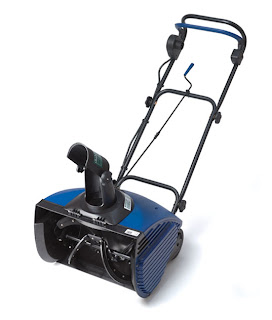 After some back and forth, we went with the Snow Joe Ultra 622U1 13 Amp Electric Snow Thrower. I'll be commenting about its performance as the winter progresses and we use it regularly, but we already had a chance to try it last Thursday (12/10), when the first big Lake Effect snow of the season dumped more than a foot of snow on us here just south of Buffalo.

Based on the test run, the Snow Joe performed admirably, handling the one foot high snow in our driveway without issue and essentially doing everything I expected of a powerful torque but lightweight snow thrower.

I know it's only August, but I live in Buffalo, and you always need to think ahead about snow. The last two winters, we went without any snow removal machinery, and it hasn't been fun. The first winter I just shoveled, and the second we hired a plowing service. The plow service was better than shoveling all the time, but there were still too many times when it snowed at inopportune times and I had to shovel so we could get out or in the driveway.

I'm determined that it'll be different this year. I've been looking for a low emission, quiet snow blower, and I came across a manufacturer (appropriately named Snow Joe) that purportedly offers an electric snow thrower that's as powerful as a gas-powered model.

The product is the Snow Joe Ultra 622U1 13 Amp Electric Snow Thrower, and its makers promise that it delivers "the power of a gas machine with the convenience of an electric unit".