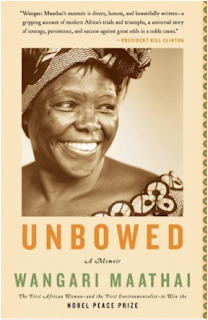 There is an early sequence in Unbowed when Wangari Maathai describes a fig tree and nearby stream where she would constantly go to fetch water. Even as a girl, Maathai relates how fascinated she was by the crystal-clear stream and all the life in the water and around it, in the shrubs, reeds, ferns, and surrounding fig tree. Later she would realize how everything was connected -- how the "fig tree held the soil together, reducing erosion and landslides," and how forests, fresh water, wildlife, everything contributed to a functional, sustainable biodiversity.

Fundamentally, Unbowed, is the story of Maathai's devotion to the natural balance and sustainability she felt at a young age. The text details her education in Kenya and abroad and key role in establishing the Green Belt Movement, an environmental and communal grassroots organization based in Kenya with a primary focus on planting trees and combating deforestation.

The book details Maathai's many struggles and obstacles to keep the movement going in the wake of government opposition and resistance. As Maathai writes, "Working for freedom and justice is often a lonely and dispiriting business." Fortunately, for the people of Kenya and all of us, she was able to persevere and grow the movement into the international organization that it is today. In 2004, she received the Nobel Peace Prize in recognition of all her work with the Green Belt Movement.

You can read more about Wangari Maathai and the Green Belt Movement via the links below: