The City & The City by China Miéville (Book Review) 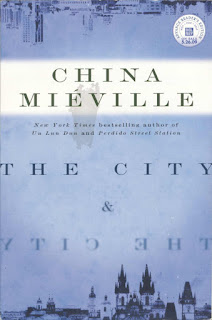 The City & The City refers to two overlapping and interspersing cities -- Beszel and Ul Qoma -- somewhere in Europe. Despite the proximity of the cities, that at times is so tight that part of a street may be in Beszel while the rest is in Ul Qoma, it is both law and custom that people observe only the environs of their city and "unsee" the other city. So, if they are in Beszel, they only see Beszel buildings, streets, and people, just as people in Ul Qoma only see people and places that are in Ul Qoma. To do otherwise is to commit breach, a serious crime enforceable by a secret power that mandates the perception of Beszel and Ul Qoma as distinct cities.

If this all sounds confusing, I submit that it is probably due to my inability to capture what Miéville has done in this novel, which is to take a speculative premise that completely jars against our expections and sense of what should be, and make it work and flow.

We are introduced to Beszel and Ul Qoma through Inspector Tyador Borlú, who's investigation of a murder leads him to travel through and explore both cities. As the plot develops and at least ostensibly follows a police procedural, the implausibility of Beszel and Ul Qoma lessens and we begin to accept the cities as they are. It does help that the cities are in Europe, which allows us to recall Berlin when it was divided and find something familiar and real to which we can compare Beszel and Ul Qoma. By the end of the novel, the notion of two cities occupying basically the same physical space or unseeing someone or something right beside you doesn't seem strange at all.

I don't normally give books a numeric or star rating, but if I did, I would hand out top honors for The City & The City. Both thought-provoking and enjoyable, this is speculative fiction at its best.