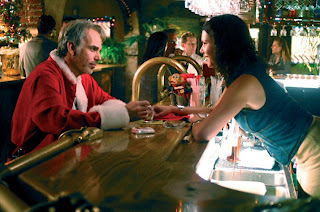 Bad Santa is crude, lewd, and utterly irreverent. But it's also hilarious and, in my opinion, the best Christmas comedy of them all.

This movie works and is funny in so many ways that a lesser film like Scrooged is not because it starts with a bad, drunken Santa (played by Billie Bob Thornton) premise and carries it through for the whole movie. It doesn't compromise or cheat to a happy ending. Yes, there is a lonely uncool kid who attaches himself to Santa. But instead of the redemption arc, where the kid helps the bad Santa become a better person, it's Santa who helps the kid become a little bad and less of a loser.

Of course this film isn't for everyone. My wife, for one, detests the movie, and refuses to watch it with me. But for people who know that sometimes a movie is very funny and "not about what it is about" [1] , Bad Santa is a holiday gem.


This is part of my 25 Days of Christmas blog series.