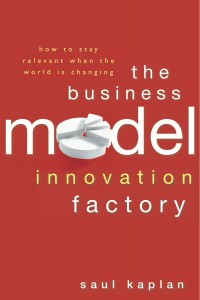 As a culture, we strive for personal transformation. Whether it's eating better and getting fit, redefining our professional value proposition through training and education, or simply trying to be kinder and gentler, we're constantly reinventing who we are and what we can do. We may not be successful all the time, or achieve breakthroughs like those featured on The Biggest Loser or facilitated by Tony Robbins, but millions of people successfully transform and reinvent themselves every year.

Unfortunately, the very organizations where we work generally do not do the same. As Saul Kaplan elaborates in The Business Model Innovation Factory, most organizations struggle to transform from their core, initial business models and tend to become stagnant and vulnerable to disruptive competitors.

The example Kaplan leads with is Blockbuster, which for a time owned the brick and mortar video and DVD rental space, until they were "netflixed" by a disruptive competitor (Netflix) with a radically new business model that challenged and eradicated Blockbuster's traditional model.

Just as individuals must continuously reinvent themselves, Kaplan urges organizations to nurture and try out alternate business models separate from their original models. Kaplan makes the point that this is different than invention and traditionally accepted innovation, which often amounts to introducing tweaks or improvements at the margins of traditional business models. Business model innovation means trying something different, developing a wholly new way to "create, deliver, and capture" value. Think Apple and how it invented the iTunes ecosystem to supplant traditional distribution channels for music.

In the third section of the book, Kapan recommends strategies for creating new business models. Here, the author cautions not to setup a business model to compete directly against a traditional model. Traditional models, vulnerable though they might be to disruption, are still often represented by people with vested interests and sufficient power to block alternative business models and maintain the status quo. The author cites the example of the auto industry which to date has kept at bay a system change to all electric cars. A better approach, Kaplan contends, is to develop new business models alongside existing models, in the adjacent possible, and to test those models in the real-world.

I've tried to capture the essence of The Business Model Innovation Factory, but there's much more in the text that will reward your reading investment, so I urge you to read the book.

You can read more about The Business Model Innovation Factory and read the introduction for free at http://bmif.businessinnovationfactory.com/.

Full disclosure: I know Saul Kaplan personally and have previously attended the BIF summit that he hosts. I also received a complimentary copy of the book. However, these comments and opinions are mine and were not reviewed, influenced, or impacted in any way by the author.