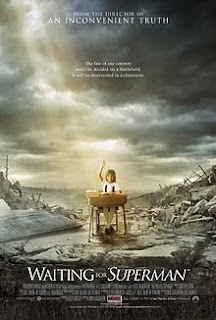 I really wanted to see Waiting for Superman when it came out in theaters, and I finally had a chance to see it a few weeks ago. That I ended up watching it the day before the Oscar's was coincidence, although I was shocked that the film wasn't even nominated for Best Documentary.

A lot has already been written about the movie, so I'll stick to my immediate impressions, which I logged right after seeing the film:
If you're an American and you haven't seen Waiting for Superman, I highly recommend you do so. Whether you have kids or not, and whether you can afford to send your children to private schools or not, this film should resonate with you.

Because the kids featured in the film -- whose last best hope for a decent education is a fucking lottery -- are after all your kids and my kids. They might be the future innovators of our country who create the next Google that revitalizes our economy in 2020, but they are much, much more likely to be unskilled, minimum wage workers, or inmates filling up our prisons, or, simply, dead.

There's a brilliant exchange in the 1985 film The Breakfast Club, between the principal Richard Vernon and the janitor Carl. The principal, frustrated managing difficult students, vents to Carl. "Now this is the thought that wakes me up in the middle of the night. That when I get older, these kids are going to take care of me."

Carl's response might have come right from Waiting for Superman. "I wouldn't count on it."