Convergence of the Twain

January 14, 2011
"Eradicating an ugly word won't erase history. And in order to learn from past mistakes, we must understand our history." 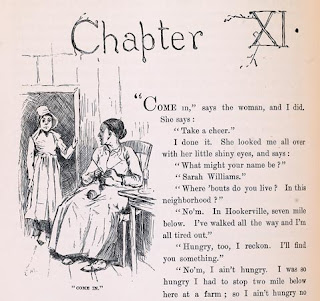 So wrote one of my friends1  in an email exchange in which we discussed The Adventures of Huckleberry Finn and the Alan Gribben NewSouth Edition that's been in the news lately -- the one in which the editors decided to eliminate the racial slurs, including the "n-word."

I was bothered by the new edition when I first heard about it and then again when I engaged in some vigorous oppositional debate about it with a neighbor. According to Gribben, the "racial insults" in The Adventures of Huckleberry Finn (as well as The Adventures of Tom Sawyer) "repulse modern-day readers" such that "this editor gradually concluded that an epithet-free edition of Twain's books is necessary today."

On the surface, the intention seems laudable: make Twain's works more accessible to American schoolchildren. And since Twain's books are in the public domain, anyone can make a revised edition, including board books for kids or a version in which Huck is a Klingon, as Neil Gaiman tweeted2. Annotated editions of classic literature are nothing new, after all.

The problem and contentiousness, then, is when it comes to the classroom, especially the middle and high school grades, and the prospect of using the revised edition instead of the original text. There's no doubt that teaching the unexpurgated book will make readers very uncomfortable and force students to confront some difficult questions and realities, including our history or racism and its past permeation in our national idiom. I reject that the experience or discomfort will be the same or even similar if students never have to read or hear the "n-word". The substitution lessens the opportunities for education and learning. Imagine a survey class on race in America that featured not only The Adventures of Huckleberry Finn, but also The Autobiography of Frederick Douglas, and the movies Do the Right Thing, Malcolm X, and Pulp Fiction. Now replace all the racial epithets and just imagine the neutered experience.

Taking this further, I think it's worth exploring why we would prefer not to teach a book that makes kids uncomfortable but that can also engender real exploration and thinking about racism. I know, it's all about the kids and what they need. But is it? The more I reflect on this, I can't help but suspect that it's more about our own discomfort with the topic -- we either don't want to dig into a meaningful discussion about race and work through everything that entails or we just don't trust ourselves as adults to handle this material with enough delicacy and understanding. After all, the "n-word" is combustible and a term that forces us as adults to explain why the context of the "n-word" is different when Huck uses it, compared to when a black rapper uses it, and compared to when a racist uses it.

No matter the reason, we're shortchanging our kids if we steer clear of difficult language and topics. The world won't always substitute harsh words or realities for them, and a whitewashed version of the past won't help them learn from history and some of our darkest sins.

- No doubt, there's an age when a student is emotionally and intellectually capable of discussing the "n-word" in a classroom setting. I don't know what that age is, but I trust our educators can pick an appropriate age and accommodate students who can't handle the material, as they must do with other subjects.

- The book should only be read if the subject and pejorative language are handled with sensitivity. This goes to teacher capability, and I suspect our teachers can handle this, as long as we're willing to discuss race openly in schools.