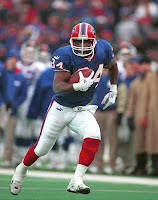 Congratulations to former Bills running back Thurman Thomas for being elected today to the Pro Football Hall of Fame.

Thomas was a consummate Bill and the linchpin of the great Buffalo teams from the late 80s and early 90s that won four straight AFC titles before losing in each Super Bowl.

Though Thomas had some tough moments in big games, including when he misplaced his helmet in Super Bowl XXVI and when he fumbled in Super Bowl XXVIII, he had a great career, amassing 12,074 yards rushing and 16,532 yards from scrimmage. He always played hard and gave everything he had. The Pro Football Hall of Fame is richer for his inclusion.